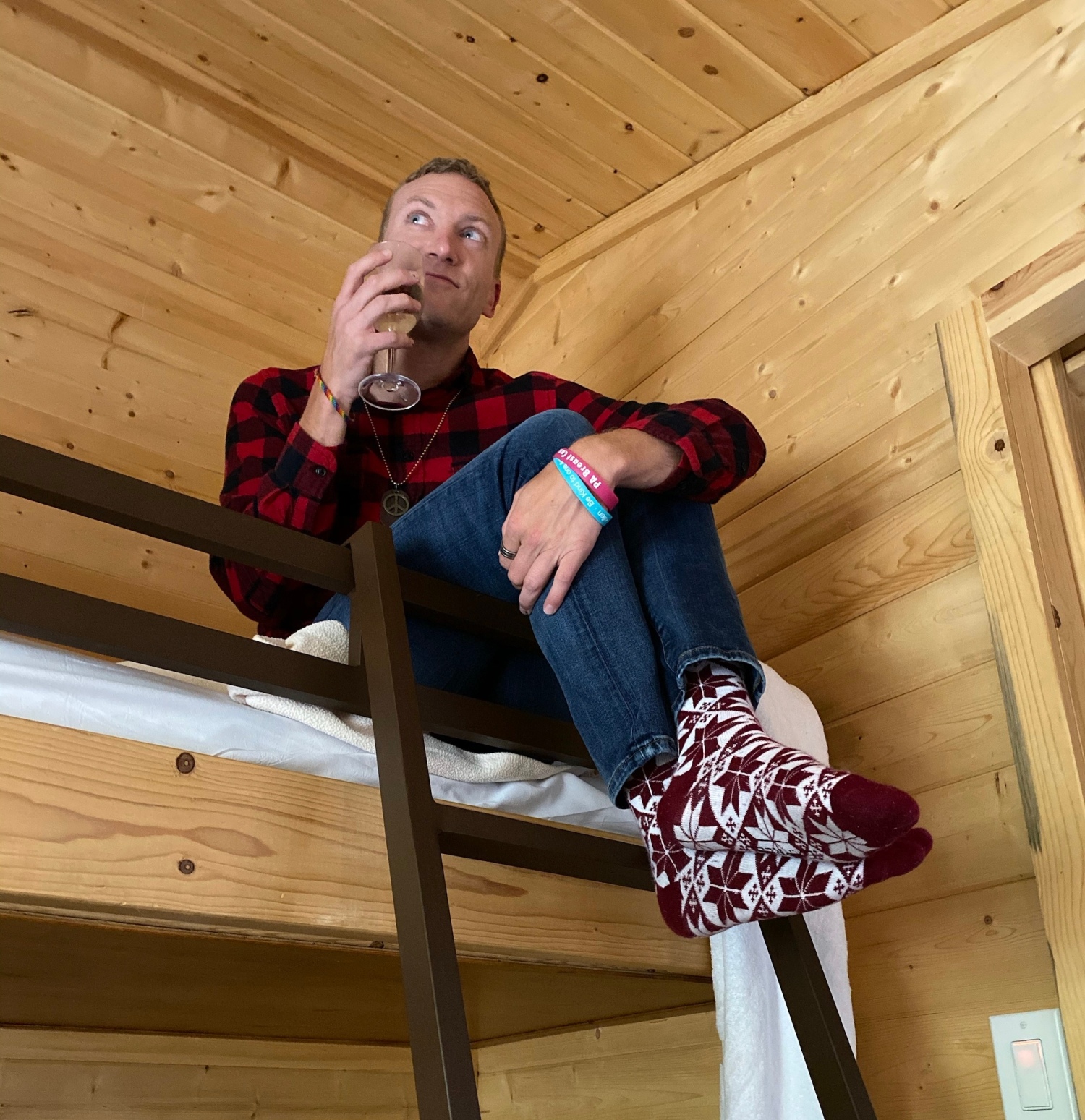 Well, folks! It has been almost a week since returning from Jackson Hole, Wyoming! And what an adventure it was. Actually, the word adventure is an understatement, so read on if you want to learn about this “adventure” that was one-of-a-kind.

It all started with a beautiful Friday September morning as we traveled to Harrisburg International Airport. Ashlea, Bailey, and I were all prepared with our suitcases and carry-ons to hit up the skies. We were READY to take on Wyoming. We arrived about two hours prior to our scheduled take off with United Airlines to the sight of only one worker checking in passengers. We didn’t really think anything of it since there were only four people in front of us, so what would adding three more humans to the line actually do?

Well…if you only knew…

Well, you will know in just a few moments because that’s the whole point of this blog!

So, grab your hot cocoa or coffee and read on!

Where was I? Oh yes, the one woman working the United Airlines check-in line with only 7 people in it…including us three.

So, essentially what we thought would be a 30 minute wait turned into what was more than an hour ordeal. Our scheduled flight was to get into Chicago where we would then fly into Jackson Hole. Well, Chicago was experiencing very bad storms, so flights left and right kept getting delayed and cancelled. But ours was still on.

The people in front of us–Phil, Linda, and Gene–were literally the sweetest people ever and making us laugh with their humor. They were in their 80’s and seriously making the wait in line 10 million times more enjoyable. Gene was a Korean War Veteran and was being changed over to a completely different airline in order to get home and I had the pleasure of getting to carry his suitcase for him. It was second nature for me–I didn’t even think anything of it and everyone waiting in line (including the airport worker) seemed to be shocked. We ran into Gene in a bit later after checking in. We talked a bit about his plans to get home and he looked up at me and said, “Thank you for what you did” and began to cry. I, too began to cry. It was a moment that was meant to happen amongst the stress of our continuous delays. 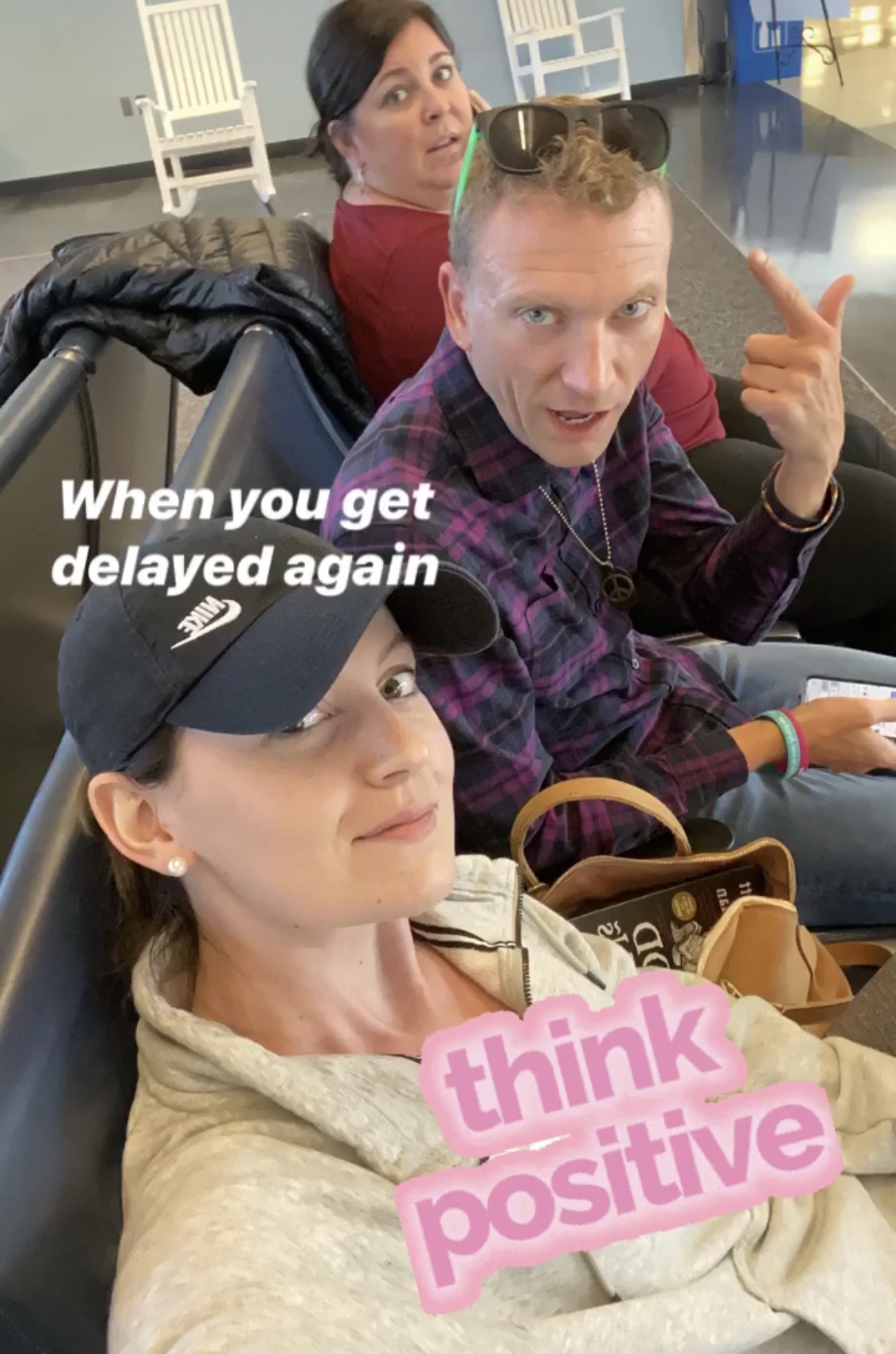 When we finally had the opportunity to check in with the lady at the United Airlines desk she told us we could chance it to get to Chicago or try to reschedule for another flight. Ashlea, Bailey, and I are not the best at making decisions; however, we ultimately decided to try and chance it! We WERE determined to get to Chicago despite what Mother Nature was throwing into the skies.

After getting through security, we all tried to find bathrooms, which happened to be out of order…so like…BYE. We had to walk around to find functioning restrooms!

After finally finding them and relieving ourselves, we decided to grab some food, so we found a restaurant in one of the terminals. We walked in to sit down and were told, “Sorry, we aren’t able to take anymore orders for the kitchen.”

WELL WHAT THE HECK?! We were hungry and just wanted to fill our stomachs.

Ultimately, we decided to hit up the Subway for some grub. We ran into our friends, Linda and Phil again from the United Airlines line earlier, which was a great joy. They just knew how to make us smile–something they didn’t truly know how much we appreciated!

At this point, after getting some grub, our flight had been delayed until 4:40pm, but it was still scheduled to take off for Chicago. We filled the time waiting in the terminal by people watching (which is always incredibly fun) and witnessing Ashlea doing magic tricks with cards, which were making my jaw drop…as Bailey recorded via Snapchat.

Right before 5pm, we were informed that our plane to Chicago would be boarding! How exciting! Mother Nature wasn’t going to win! We started to line up to board and just about 1 minute after being told we were boarding, we saw the pilot hang up the phone at the desk and were informed, “Just kidding. We are no longer boarding. Flight has been cancelled.”

WHAT?! We got a text update telling us that we automatically got rescheduled to a flight leaving on Saturday at 1:20 from Harrisburg, which wouldn’t work–our wedding in Jackson Hole was at 3pm. We would miss it. 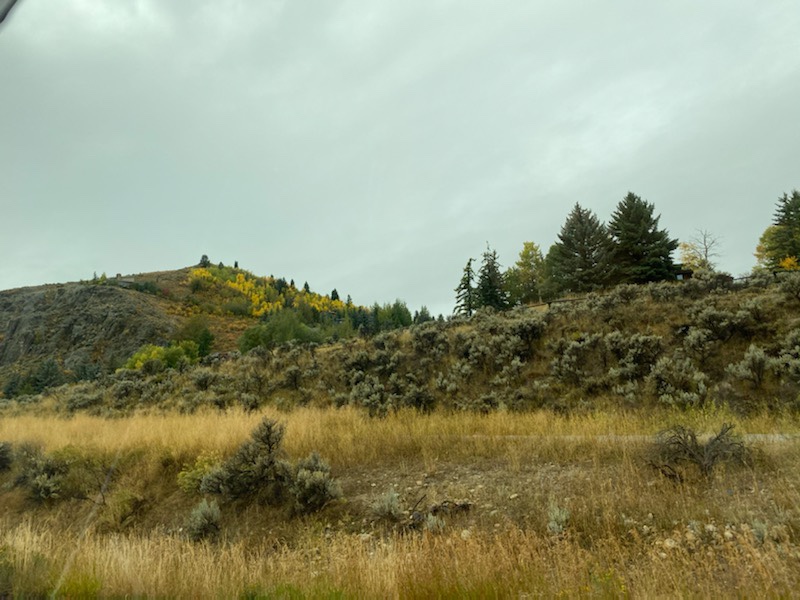 Bailey and Ashlea began frantically searching other options, specifically Philly since Harrisburg just doesn’t have the size for options. We found a 6:30am flight from Philly to Denver and Denver to Jackson Hole. Arrival time was around 12:40pm, which meant that we would still arrive in time for us to make the wedding. It was perfect. Ashlea got on the phone with United and after about a 45 minute wait, she was finally connected to a representative. We told them our predicament and that we wanted to be switched to the flight from Philly for no additional cost.

The woman on the phone literally talked in a different language to her coworker on multiple occasions (with not using the hold button) and kept saying “one moment ma’am.” Finally, after about 10-15 minutes, we were set. A 6:30 take-off time from Philly was actually going to happen! We are coming for you Wyoming!

We bought tickets for the train out of Lancaster at 9pm and had made arrangements to stay with Ashlea’s friend, Lauren in Philly–who happened to live just about 10 minutes away from the airport. PERFECT.

What happened once we got into Philly? Well, we got in the wrong Uber to take us to Lauren’s house and Ashlea also entered the address to her location completely wrong. When the driver dropped us off, Ashlea said, “This is definitely not it.” The quote of the night when asked about the address she entered because the Uber driver mentioned maybe entering it wrong was…”No, that’s correct!” After a quick call to Lauren, we discovered we were 15 blocks away. Bailey and I won’t let Ashlea live that down…ever…for as long as we live.

Our morning alarm got us up SUPER EARLY and after a drive to the airport with an Uber driver that literally didn’t keep quiet the entire drive about Denver airport conspiracy theories, we finally were getting closer to actually getting on a plane.

We were never going to get through it. Just witnessing peoples’ faces as they saw the humans in line started to become comical.

My face was probably becoming so panicky at this point…hence…why I NEVER fly.

Regardless, the line did move fast and we got through security with no issues. YAY! We were almost on our way!

Anyone who has gotten the chance to know me understands that flying is a huge fear of mine. I don’t like take off…I don’t like landing…and I don’t like all the in between. It’s hard for me to relax. Regardless, the flight to Denver wasn’t terrible, but we did experience some turbulence that had me gripping the seat quite hard. My face was probably as white as a ghost.

After arriving in Denver, we were informed that our flight to Jackson Hole was delayed by 35 minutes–really?! Couldn’t our luck upswing just a little?!

Even with the 35 minute delay, we determined that we would still arrive in Jackson Hole in enough time, so there was no need for panic. 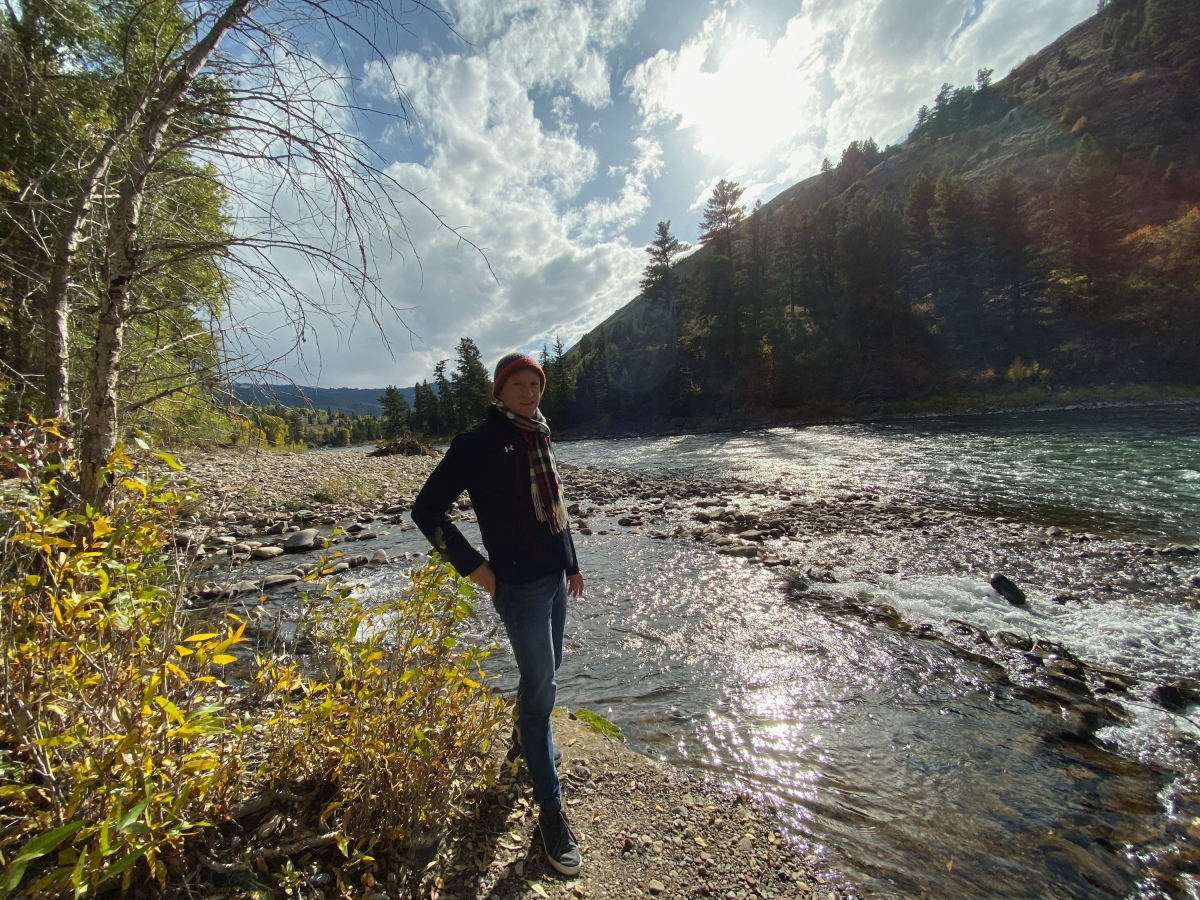 The only piece of information that you need to know about the flight from Denver to Jackson Hole is that the pilot literally said to us, “We will be landing abruptly and suddenly, so please tighten those seatbelts.”

Literally…the quote that Mr. Sunshine does not want to hear when dealing with flying, especially when I’m not a fan of it.

True story: I held Bailey’s hand as we landed. I was terrified.

After landing and getting off the plane, we were greeted a brisk, chilly sleet-like rain at the airport. Jackson Hole does not have terminals, so you are exposed to the elements of weather.

We picked up our rental car and started our way to our cabin where we were staying. At this point, making the wedding just didn’t seem possible because of the delays we had experienced, the need to shower and also clothe ourselves properly since we had been traveling in comfy clothes.

Long story short–we ended up not making the wedding, but we did get to the reception where we got to enjoy wonderful food, company, and dancing. It was a great night. 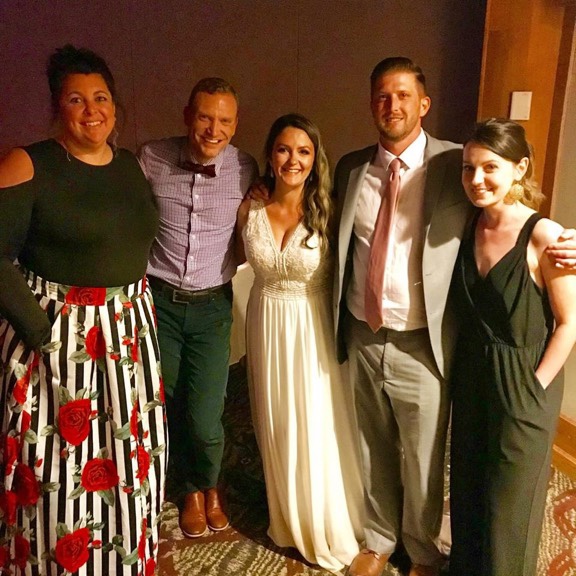 Needless to say, we slept pretty well on Saturday night considering we had been up for quite some time and had about 4 hours of sleep. 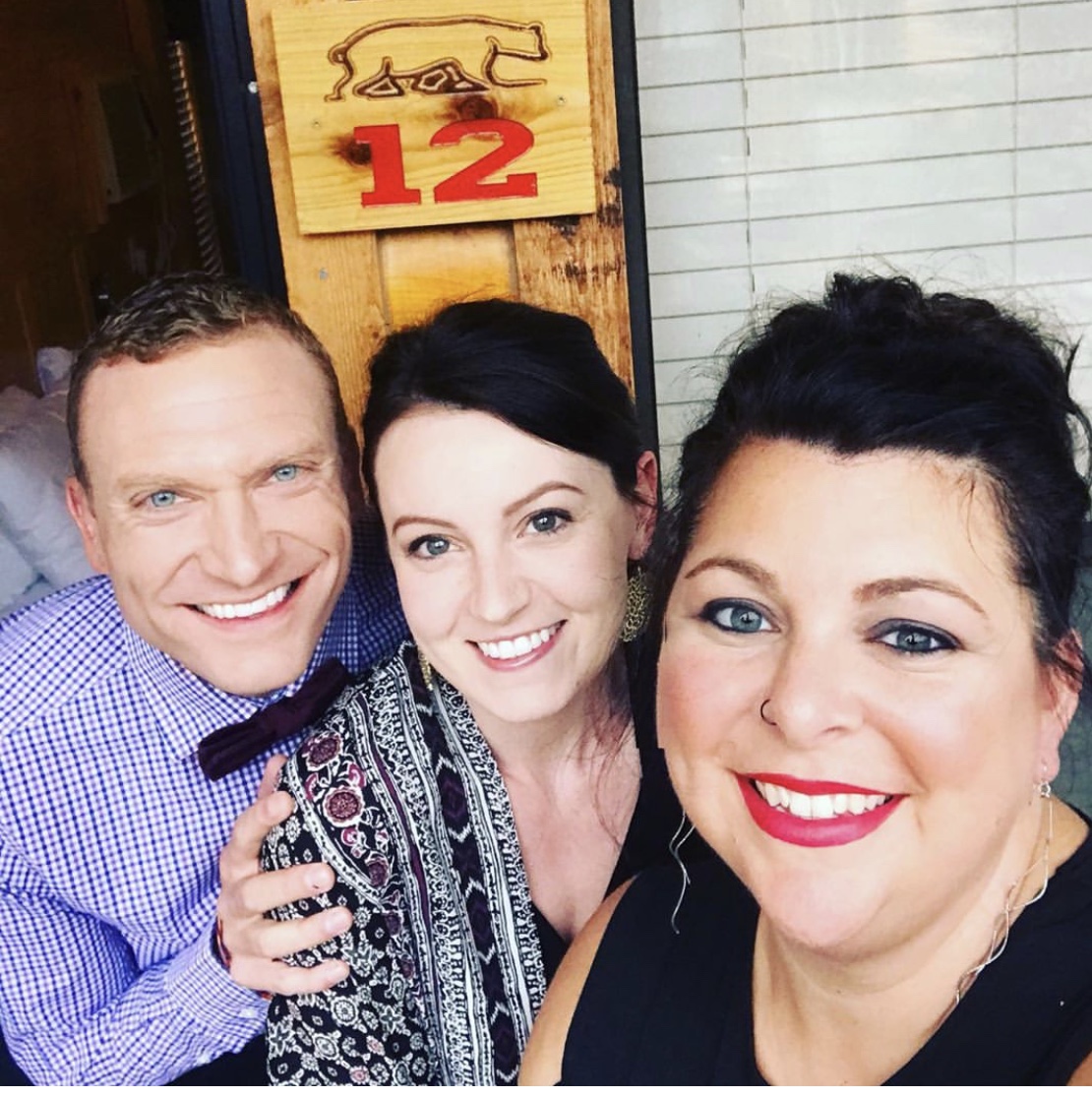 We started our trek to the National Park we were so excited to visit and as we drove along, we witnessed some of the BEST and MOST BEAUTIFUL scenery. Truly breathtaking. Something that can’t be described–it needs to be witnessed in person. The pictures just don’t do it justice.

The directions Siri was giving to us just didn’t seem right, but we went with it. We passed a sign for Idaho–but again, we didn’t really think anything of it.

But like, what?? Our destination? We were literally in a neighborhood out in the country. In the middle of nowhere.

But we did know one thing…

…It was not Yellowstone.

We literally started laughing because there was nothing else to do. It was too comical.

We were determined to get to Yellowstone, so as we started the 2 hour trek back (since we were a little out of our way), we told ourselves that we would at least take a picture with the huge SPUD we passed as we entered Idaho. 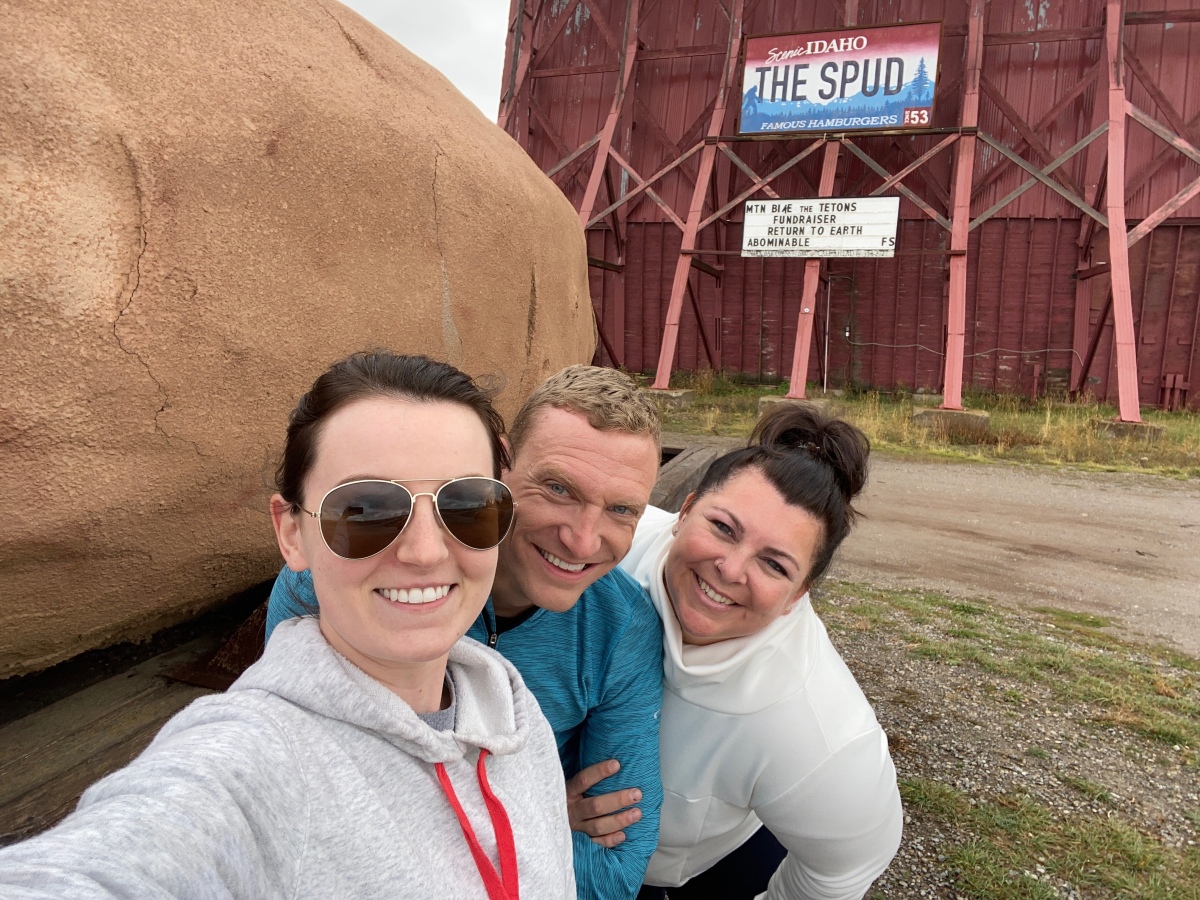 Yellowstone was gorgeous even despite the fact that the Park Ranger who greeted us exclaimed, “Welcome to Yellowstone! All the roads are closed! That’ll be $35!”

I’m sorry…all the roads are closed? What does that even mean? How will we get to see the sights? Are we going to be able to get out of here? Will we get trapped in the flurry of snow that was starting?

These were all the questions going through our heads.

Yellowstone was beautiful. We didn’t see many animals, but what we did get to see was absolutely amazing. Old Faithful was awesome. The geysers were beautiful. Everything…just amazing.

We didn’t even get to experience that much of Yellowstone–you literally need like a whole week to see everything! We only saw a small piece of what is actually is. But what we did get to see was totally worth it. 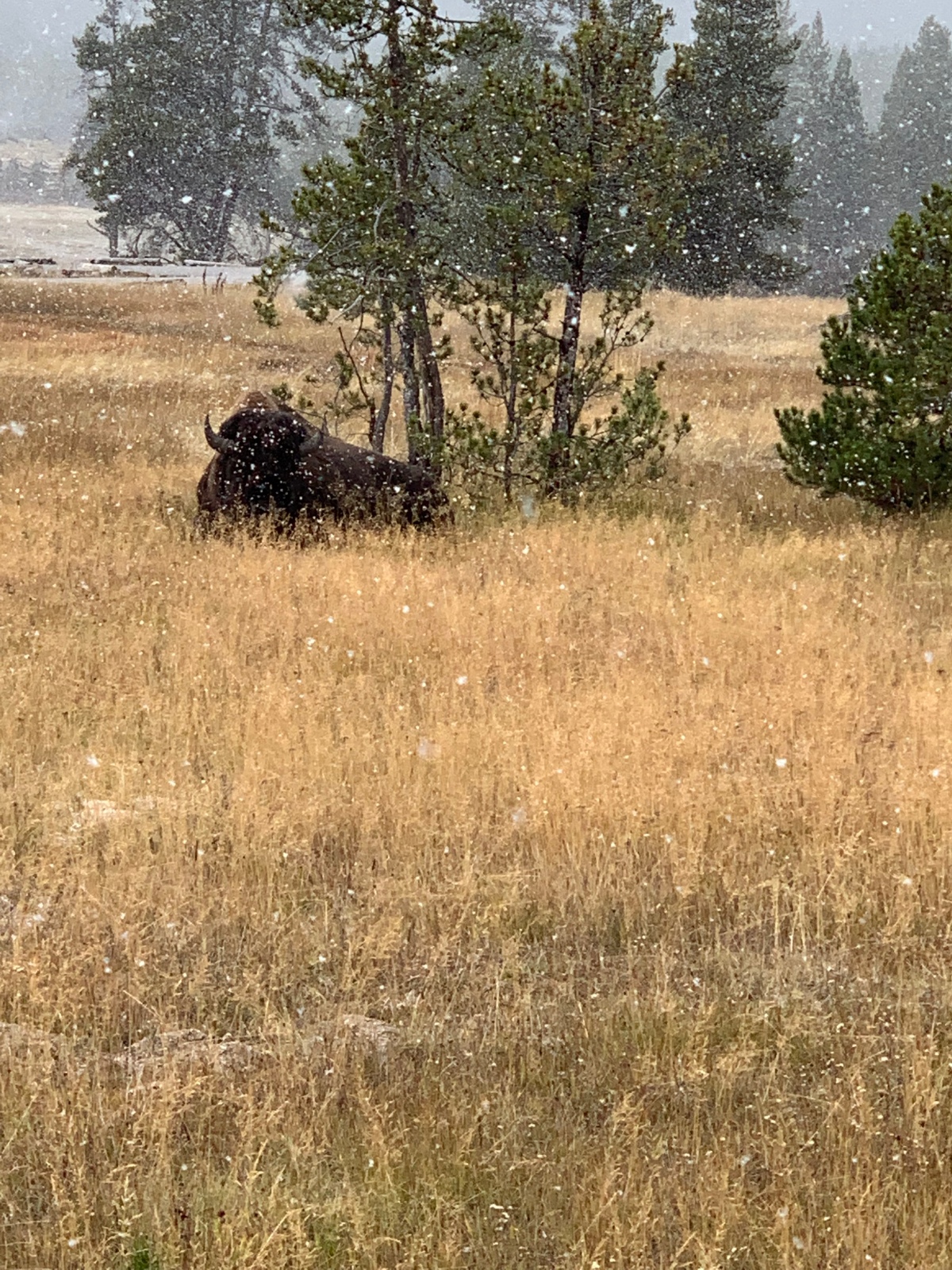 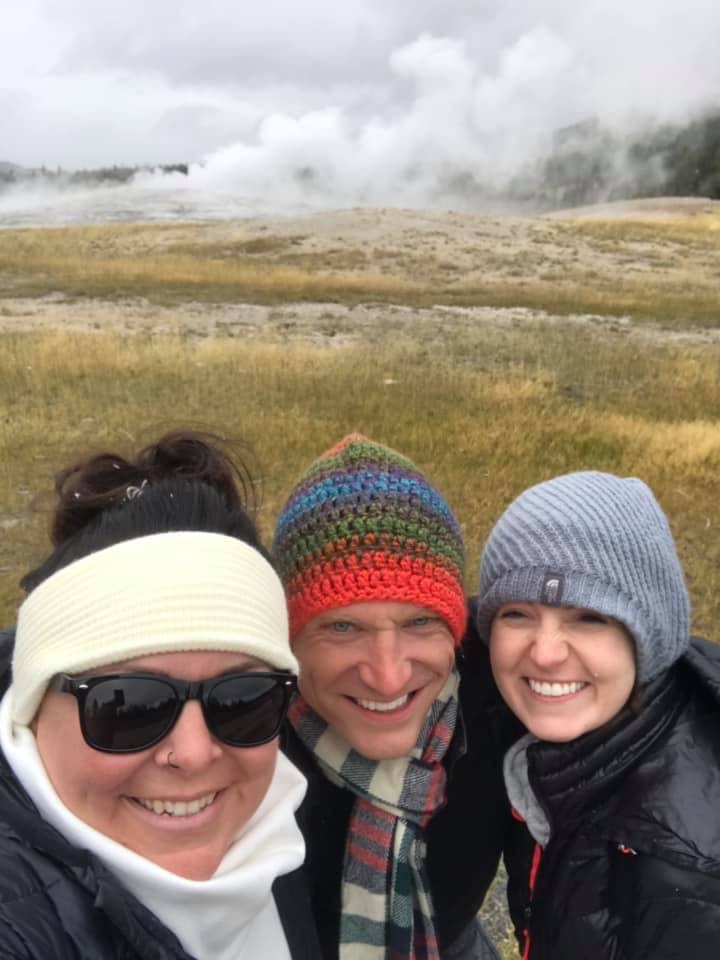 We spent a majority of our Monday experiencing the downtown area of Jackson Hole–such a cute town. So many beautiful shops, delicious restaurants, and such nice humans. It literally looks like a town out of a Western movie.

Monday night we got to play cards outside of our cabin (which was super cute by the way) and had the opportunity to look up at the clear sky and stars. It was like a painting. So clear. So beautiful. We could say that it was picture perfect.

Wyoming and Jackson Hole did not disappoint. It was glorious and a very nice respite from the city life. But I couldn’t live there. 4 days of nature is just enough for me before I feel the need to get back to the hustle and bustle of what is known as the chaos of Mr. Sunshine’s life.

There is so much more that occurred during this trip that I can’t possibly begin to blog about because every detail would just bore you to tears…and writing it isn’t as good as talking about it in person.

So if you want to know more, you know how to find me.

The moral of this blog? 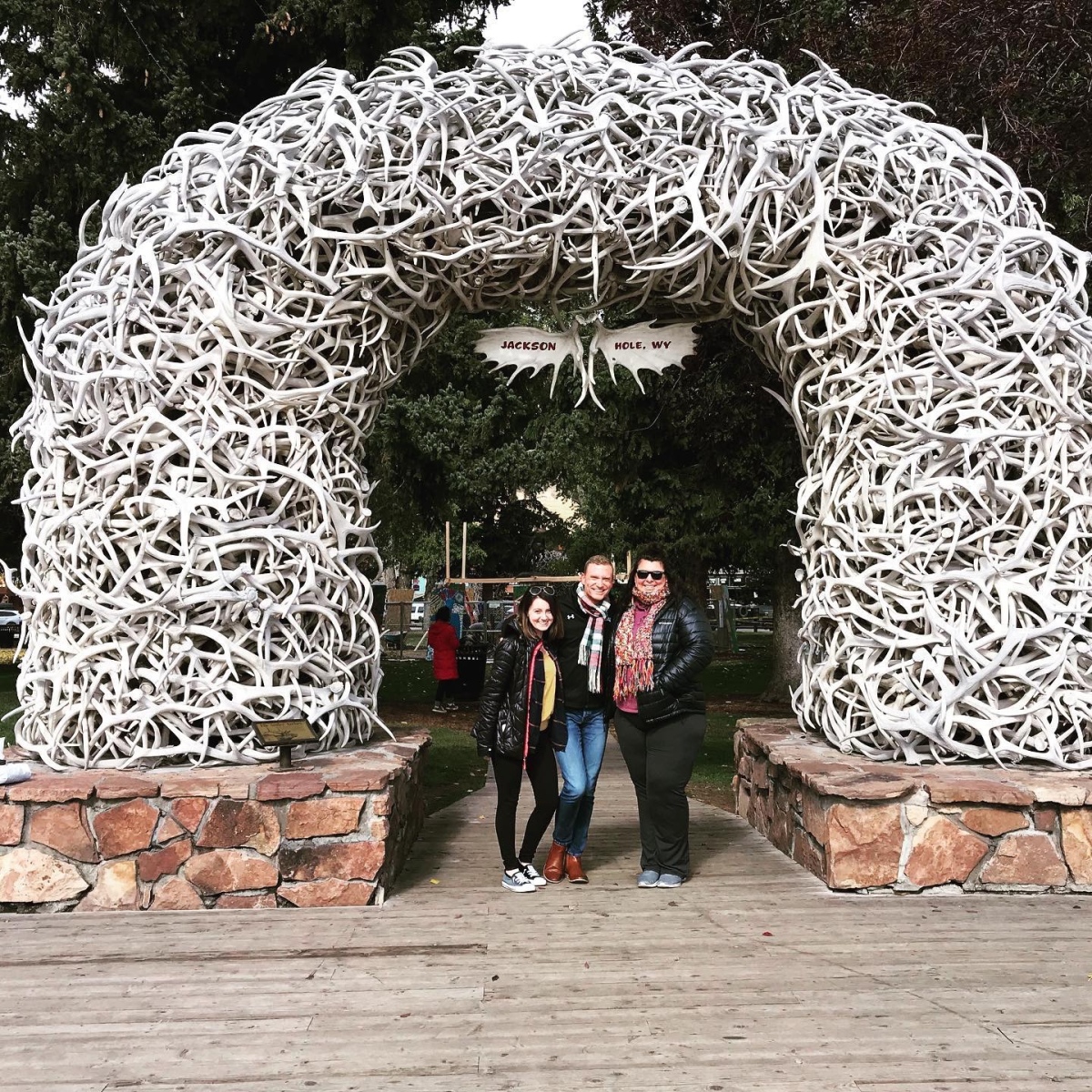